Known for its stunning beaches and quaint villages, if you are looking for something a little more curious, there’s many more things to see in Anglesey.

From seemingly out of this world landscapes to places with really long names and prehistoric tombs to haunted lighthouses, here’s a selection of unusual things to do in Anglesey, Wales.

What’s more, apart from parking charges, the majority of these Anglesey attractions are completely free to visit.

When visiting Anglesey, you can’t fail to miss the Menai Strait because you’ll have to cross right over it. So we’ll kick off our unusual things to see in Anglesey with this.

A shallow tidal water, the Menai Strait separates the island of Anglesey from mainland Wales. It was carved during the last ice age by a mixture of glaciers flowing from Snowdonia and the Irish Sea ice stream.

It’s so narrow that each side is quite clearly visible from the other. In fact, Bangor pier very nearly sketches right across to the Isle of Anglesey. At low tide the water is less than 50cm in some places. But it cannot be crossed safely on foot due to shifting sandbanks.

Instead there are two bridges; the Menai Suspension Bridge and the Britannia Bridge. Differential and rapid tides at each end cause strong currents and whirlpools. The most dangerous part is the central region between the two bridges known as ‘The Swellies’.

There are a number of islands within the Menai Strait. Before the first bridge opened in 1826, farmers swam their pigs and cattle across the treacherous waters. Ynys y Moch, which means ‘Island of Pigs’ is where they are thought to have rested.

There’s also the private occupied island of Ynys Gorad Goch with houses and outbuildings visible from the bridges.

Stepping off the tarmac car park onto the walking trail around this now defunct old copper mine feels like you are stepping onto another planet. Immediately you are met with a vibrant palette of reds, oranges, pinks, greys, browns, purples, blacks, greens, yellows, and blues.

Then following the path through the weird and wonderful landscape you come to the stunning panoramic view of the Great Opencast. Here you can see the full scale of the open mine.

Dating back to the Bronze Age, it was during the late 1700’s that Parys Mountain had its heyday. Over 150 years 3.5 million tonnes of copper ore was extracted. And the previously little known close by town of Amlwch came to dominate the world copper market.

The mine became known as ‘The Copper Kingdom’, and the owner ‘The Copper King’. And following a national shortage of small coinage, The Parys Mine Company even produced ten million pennies and half pennies between 1787 and 1793 to pay its workforce.

This fascinating terrain is definitely a must when it comes to things to do in Anglesey, Wales.

Along the east coast of Anglesey you’ll find an alluring seaside town called Beaumaris. As part of his ruthless campaign to conquer North Wales, the English King, Edward I began constructing the last of his royal strongholds here around 1295.

After building castles all along the North Wales coast in Conwy, Caernarfon and Harlech, Beaumaris Castle was set to be his masterpiece. Referring to the landscape on which it sits, the name Beaumaris translates as ‘fair marsh’.

But due to dwindling funds and increasing quarrels along the Scottish border it was never finished. And it has since become known as the ‘greatest castle never built’.

The accompanying town with its pastel cottages, picturesque pier and charming streets is also fascinating to wander around. And despite being a popular modern day tourist town, still gives off a strong allure of its deep history. When it comes to Anglesey things to do, stopping by Beaumaris is a must.

Famous for its full name, Llanfairpwllgwyngyllgogerychwyrndrobwllllantysiliogogogoch, this Anglesey village has the longest place name in Europe. It reads 58 letters long. But in Welsh only actually has 51 letters as “ch” and “ll” are considered single letters.

Curiously over 70% of the population in Llanfairpwllgwyngyll speak Welsh. Which is way above the national average of 29%.

Translated into English, the name means ‘St Mary’s Church in the Hollow of the White Hazel near to the Rapid Whirlpool of Llantysilio of the Red Cave’. It was thought to be given to the village as a publicity stunt in 1869, with the aim of attracting more tourists.

Even though there’s not really any other Anglesey attractions here, as it’s situated just next to the Britannia Bridge it’s worth popping in. You’ll find the village’s nametag in full at Llanfairpwll railway station.

Definitely one of the more novel things to see in Anglesey, Wales.

Read Next: Quirky Accommodation For Couples In Anglesey

After East Anglia, Wales has the UK’s second largest expanse of fens. With three of the four are situated on the small island of Anglesey. Cors Erddreiniog is the largest, then there’s Cors Goch and also Cors Bodeilio.

But what even is a Fen you may well be asking? Well it’s a unique type of wetland, fed by alkaline water, which is now extremely rare in the UK and Europe.

All of the Anglesey Fens are protected National Nature Reserves. Each with wooden boardwalks so that you don’t disturb the tranquil and fragile environments beneath them.

Depending on the season and time of day, you can spot anything from rare dragonflies and aquatic beetles to skittering water voles and barn owls. There’s also blood sucking leeches within the water. Just in case you need another reason not to venture off path.

If you’re a fan of nature this is simply one of the things to see in Anglesey that you just cannot miss.

Situated just off the NorthWest coast near Holyhead, visiting this impressive landmark is a must when it comes to top things to do in Anglesey.

Taking the 400 steep steps down from Holy Island onto the tiny separate islet, you can go inside and take a tour of the South Stack lighthouse. The tour includes a visit into the engine room and up to the top of the lighthouse to take in the views.

It’s also a great place to watch the numerous seabird colonies, including puffins, who use the rugged cliffs as a summer breeding ground. Especially at sunset.

Built in 1809, South Stack lighthouse has long since been guiding vessels across the Irish Sea. It’s a spectacular sight in any weather. But given it is thought to be haunted, perhaps even more so when an atmospheric mist comes rolling in and adds to its mystery.

The legend goes that a local man called John Jack Jones was hit on the head by a falling rock in October 1859 as he made way to the lighthouse to warn ships of a violent storm.

While he dragged himself part way along the path, his cries were drowned out by the battering wind and rain and wasn’t found until the next morning. The storm was devastating. Claiming 800 lives in 200 shipwrecks, including that of the Royal Charter just off the Welsh coast.

Excavated in 1928, you’ll find this important 5,000 year old prehistoric monument rather randomly located in a farmers field. The name, Bryn Celli Ddu, means ‘the mound in the dark grove’. You can go through an 8m stone passage right into the heart of the burial chamber.

It is understood to have been built to protect and pay respect to the remains of ancestors. Both burnt and unburnt human bones found inside suggest a range of funeral practices took place here. Flint arrowheads and impressive carved stones were also uncovered.

There are other ancient tombs on the Island of Anglesey, but what sets this one apart is a precise and particular feature of its unique design that can only be witnessed once a year.

Which is that at the sunrise of each summer solstice, shafts of light shine directly down the passageway illuminating the chamber within.

It’s truly fascinating and hard to believe it’s one of the free things to do in Anglesey.

There’s only really one word to describe this small tidal island and that’s magical. Backed by rolling sand dunes and dense green forest, this Anglesey hidden gem can only be accessed from walking either along Newborough beach or through the woodland.

The whole area is part of Newborough Warren National Nature Reserve and is seriously stunning. It was a favourite of our Wales road trip and is simply a must when it comes to things to see in Anglesey.

But Llanddwyn Island in particular is shrouded in a mysterious history and is an important place of pilgrimage. The story goes that after a disaster in love, a Welsh princess, the daughter of the 5th century king Brychan Brycheiniog fled here and lived a life of solitude.

She became known as Saint Dwynwen, the Welsh patron saint of lovers. Making her the Welsh equivalent of Saint Valentine. Rather oddly it is believed that the faithfulness of a lover could be determined through the movements of some eels that lived in a holy well.

There are also two lighthouses, Tŵr Bach and Tŵr Mawr, and a series of pretty cottages that were built to house pilots whose job was to guide ships into the Menai Strait. The island is also home to an abundance of seabirds including cormorants and puffins.

Accessible most of the time, this Anglesey point of interest does however become cut off for two hours over high tides. Be sure to check the tidal information here so you don’t get caught out. 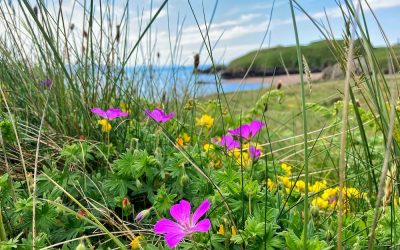 10 Quirky Places To Stay In Anglesey For Couples

Top pick of cool and unique places to stay in Anglesey for couples. From lodges with hot tubs to traditional Welsh cottages and modern apartments. 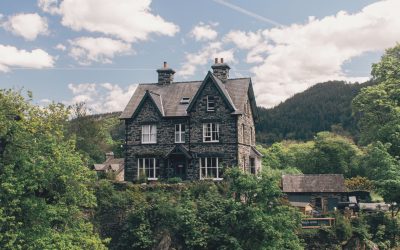 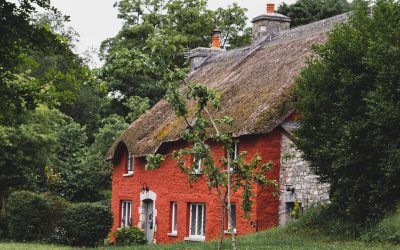 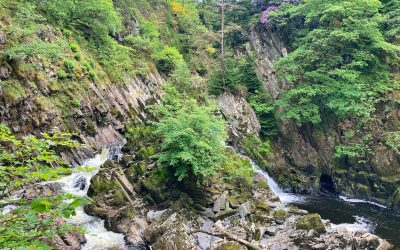