Plan A Perfect Trip to Uruguay

Sandwiched between the gigantic countries of Argentina and Brazil, Uruguay is a bit of an underdog when it comes to South American travel destinations. Many travellers choose just pass through, staying only a few days under the misconception that there isn’t much to do.

With such a laid back, liberal culture we loved our trip to Uruguay and wish we could have stayed longer. Our advice would be to give yourself a while when you visit Uruguay on your way between Argentina and Brazil allow time to take in the many faces of its wonderful landscapes.

There really is something for every type of traveller where Uruguay’s beaches are concerned. From the chilled out, hippy vibe of Punta del Diablo, to the hedonistic glitz and glamour of Punta del Este and the remote minimalistic living in Cabo Polonio, Uruguay has it all.

Known for having some of the best beaches in South America there is however more to Uruguay than its stunning sandy southern shores. In planning a trip to Uruguay you should be sure to take some time out to also appreciate the charm of Colonia del Sacramento, the history of Montevideo and the wilderness of Parque National Santa Teresa.

One of the best beaches in Uruguay

A short ride on a boat from Buenos Aires, Colonia (as it is known for short) is where you’ll likely start or end your trip to Uruguay. It is a sleepy city steeped in colonial history and you can easily spend a couple of peaceful days here. There’s hardly any traffic and it’s a delight meandering through the cobbled streets dotted with vintage cars and old horse carts.

You’ll come across many crumbling historical colonial buildings and small museums worth stopping by. The architecture is reminiscent of when the port was a Portuguese settlement and so has a strong European influence.

Grab a delicious treat from one of the ‘heladarias’ serving top notch ice creams and wander around the ruins of the old city wall. Clamber up the lighthouse for panoramic views of the city and the bay. Independent family run restaurants and cafes serving local foods are great for sitting outside at and watching the world go by with a beef ‘asado’ or seafood pasta dish.

We spent a really pleasant evening watching one of the magnificent sunsets that are plentiful here. We’d recommend accompanying your viewing with a glass of locally produced, full bodied Tanat red wine.

The capital city is a cool and confident economic hub only a couple of hours away from Colonia. It leaves little to the imagination as to why over a third of the 3 million population of Uruguay have migrated here. There has also been much immigration from Italy and Spain, giving the city a distinct European feel.

The capital city is a cool and confident economic hub only a couple of hours away from Colonia. It leaves little to the imagination as to why over a third of the 3 million population of Uruguay have migrated here. There has also been much immigration from Italy and Spain, giving the city a distinct European feel.

Football is the national sport of Uruguay and if you are visiting Montevideo on your trip to Uruguay you absolutely must catch a home game and experience the atmosphere at the ‘Estadio Centario’.

In this busy but laid back city a monument of sexuality stands pride of place celebrating a respect for all identities and sexual orientation.

BBQ time during our trip to Uruguay

If like many Uruguayans you are a red meat lover, don’t miss visiting the steak houses in ‘mercado del puerte’. We also loved the Morcilla and Chorizo sausage. Yum! Bustling with eatery tables during the day the square becomes an outdoor tango dance hall during the evening, Don’t worry you can just watch. But reputed by Uruguayans and disputed by Argentines as the true home of Tango, there are also plenty Milongas here to learn a few steps and let your hair down in.

Shoppers will be in heaven in this hip and happening city with plenty of eclectic independent shops. Flea markets in Montevideo also sell everything from fruit and veg to antiques and animals. If you like art, Montevideo won’t disappoint with many chic cafés doubling up as art galleries.

You have to visit Uruguay

Nicknamed the St Tropez of South America, this luxurious beach resort is a VIP playground for the elite and famous. Over the summer months of December to February South American celebrities and socialites favour Punta del Este as a holiday destination.

We didn’t actually visit due to the expense of glamorous accommodation and swanky restaurants. But if you can afford a stop off here when you visit Uruguay, we’ve heard from other travellers that the lazy day beaches amongst skimpy bikini and muscle clad bodies accompanied with the glitzy full on partying nightlife is well worth it the extra spend.

A world apart from the bustling capital of Montevideo and hedonistic party town of Punta del Este, Punta del Diablo is the likely next stop on your trip to Uruguay. A rustic fishing village popular with hippies, backpackers and surfers. We stayed in Punta del Diablo for two weeks and relished our time here staying in a beach hut, cooling off in the waves and popping over the sand dunes for a cheeky Caipirinha cocktail.

The best caipirinhas in the world

The beaches are beautiful and plentiful and you won’t go hungry with street food sellers wandering up and down the sands. We had some fried seaweed fritters one day and they were so good. Restaurants aren’t exactly cheap so if you are travelling as budget backpackers like us we’d recommend shopping at the supermarkets and cooking up your own delicious BBQ.

There’s a major hippy vibe here and temporary street stalls selling bohemian clothing and quirky jewellery pop up along the small dirt streets fanning out from the beaches. Marijuana is readily on sale here in particular, but beware – despite the country’s liberal stance to its residents use it is NOT legal for foreigners to purchase it.

Just 15 minutes on a bus from Punta del Diablo is the glorious sprawl of Parque National Santa Teresa. Dispersed campsites are dotted amongst the eucalyptus and pine forests make for great trip back to nature.

A super good spot for hiking the main highlights are the hill top fortress of Fortaleza de Santa Teresa, a protected sea turtle habitat, and the vast lagoon of Laguna Negra where lots of wildlife including flamingos and cabybaras can be spotted.

Another reason to visit Parque National Santa Teresa is the unrivalled star gazing spots due to the zero levels of light pollution here.

The skies are beautiful in Uruguay

Cabo Polonio has a sleepy indifference to the other beach resorts, it doesn’t care whether you visit or not but is happy to see you if you do. Accessible only by catching a ride on a 4×4 or trekking a 7km hike over wild sand dunes, this tiny fishing port is quite hard to reach so give yourself most of the day to get there.

Plan a perfect trip to Uruguay

Owing to its remoteness there is no electricity or running water in the town and residents and visitors alike stay in wooden shack homes collecting water from wells.

The nature and wilderness of this place really enables you to escape the crazy eccentricities and expectations of western modern day life. Laze your days away in a hammock, take on the waves with a surf board or simply have a wander along the wild stretches of unspoilt beaches that often lay adorned with sea lions. Just don’t expect any internet or contact with the outside world!

If you have time head inland from the coastline to an estancia to try your hand at horse riding and learn the ways of the gaucho life. Gaucho traditions are a very important part of Uruguayan culture and heritage. Many more of these family ran rural working farms are just recently starting to open their doors to the tourism industry and staying a few days at one is a fascinating way to learn about this Uruguayan history.

Heading up to the Brazilian border (or what will be your first stop if coming the other way through to Argentina) is an interesting stop off called Chui. Intriguingly this town lies half in Uruguay and half in Brazil, you literally walk across the street and you’re in another country.

There’s not much going on in the town except cheap food, drink and electronics. We made a trip up to here whilst we were staying in Punta del Diablo with empty backpacks even to bring back wears to keep our budget down.

Be warned, it’s not worth spending more than a few here though and as buses only run once and early on Sundays, don’t get stuck like we did!

So hopefully I’ve given you enough of a taste to make sure you give yourself time to explore when you visit Uruguay. It really is worth taking the time the rich diversity and culture of this beautiful country.

Pin me for later! 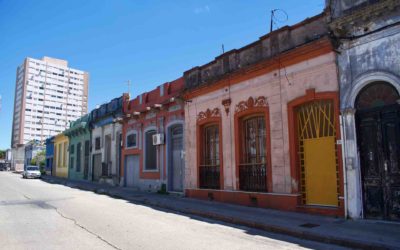 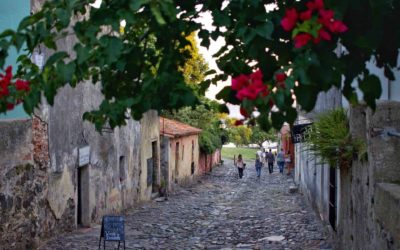 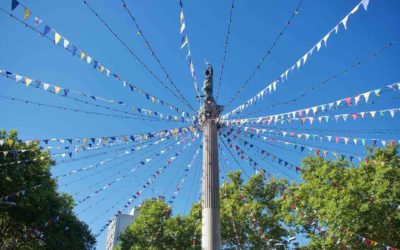 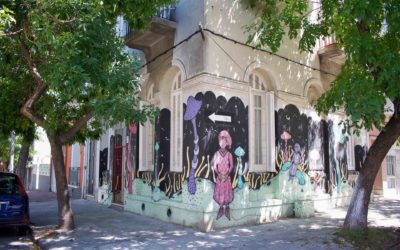