This is a difficult blog post to write because I am extremely conscious that what I am about to say is very much not my story to tell. I know before I even put my fingers on my keyboard that my words will never justly be able to describe the tragedies and horrors carved deeply into the history of Cambodia. But visiting the hard parts of Cambodian history had a such profound effect on my experience of the country and my perceptions of the world that I feel compelled to write about how it made me feel.

You see many tourists visit Cambodia solely to be awed by the mystical ruins of the Angkor Temples in Siem Reap. I’m certainly not saying don’t see them – that would just be insane! They are without a doubt some of the most incredible sights my eyes have ever clapped sight on and should absolutely be on your travel itinerary. However, I want to share with you my opinions on why I believe every traveller to Cambodia should make time to go beyond the Angkor Wat Temple complex and expose themselves to the dark past of Cambodian History. 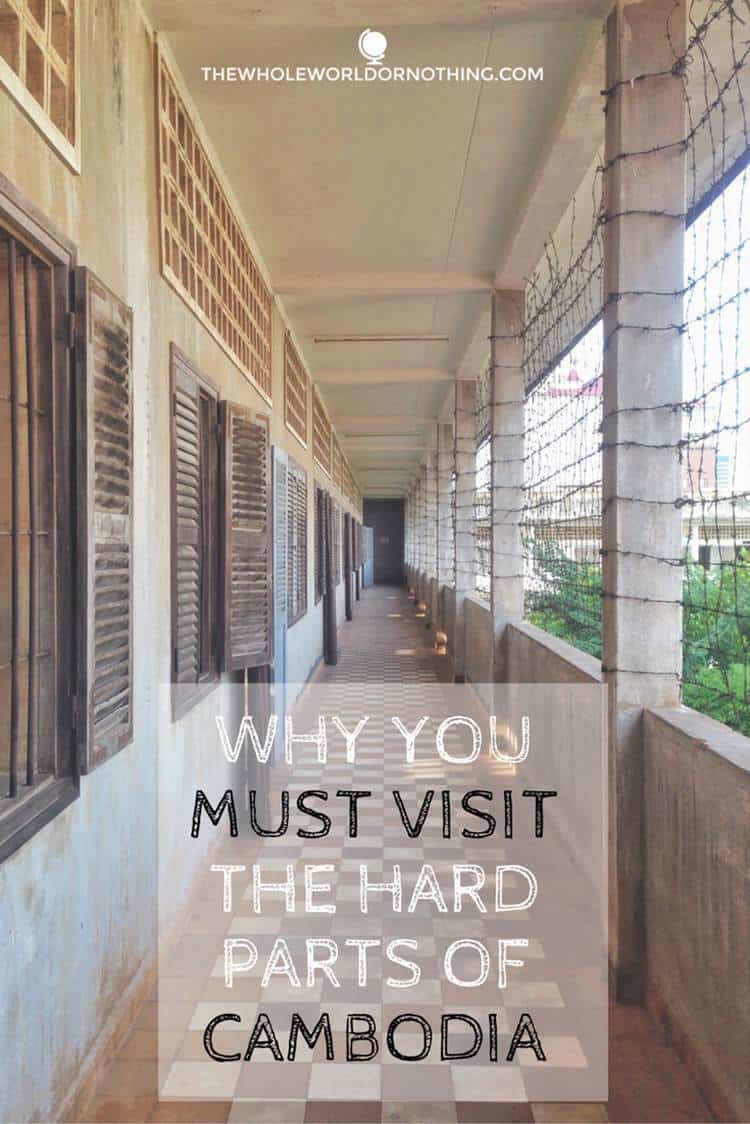 Now I don’t know how much you know about the genocide in Cambodia and I’m certainly not going to presume your ignorance on the matter. But I knew virtually nothing about it before I visited Cambodia and so I’ll give you a few brief details on one of the worst human rights atrocities the world has ever seen. When they chose to see it that is, but more on that later. From April 1975 to January 1979, either through vile and cruel torture techniques or enforced starvation, exhaustion and ensuing crippling disease, the government in power in Cambodia brutally murdered between 2 to 3 million of their own people. 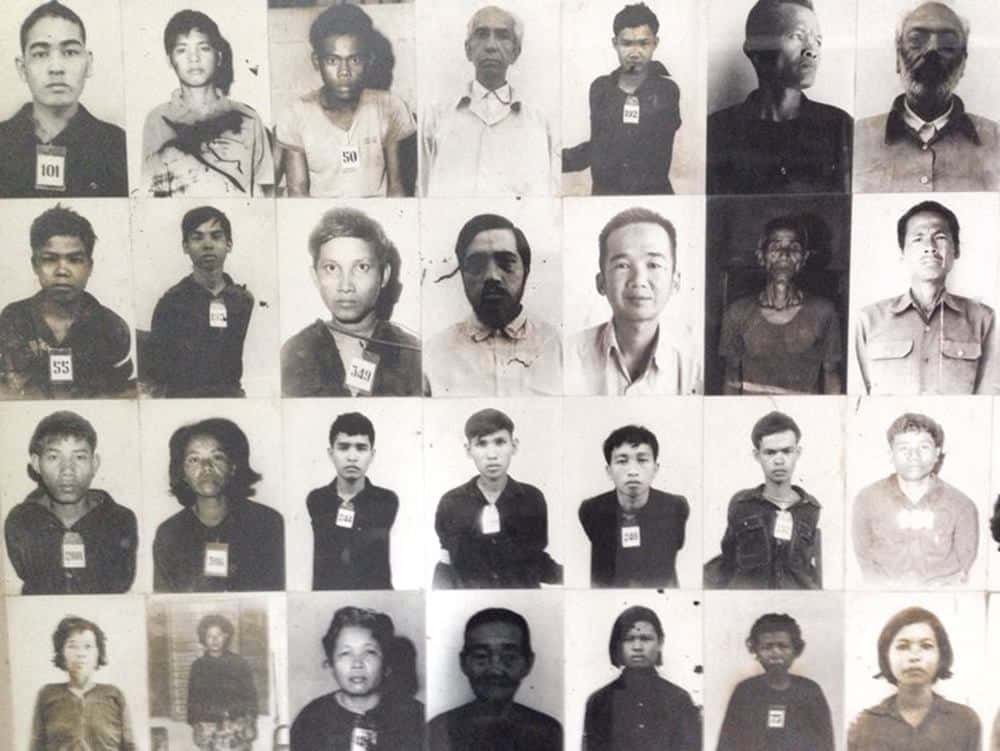 The fact that there is such a vast margin of error on the estimated death toll speaks to the unbelievable tragedy that unfolded in the country. Tragedy isn’t even the right word, tragedy is a family being killed in a car crash or a boat sinking and drowning a crew full of people. What the Khmer Rouge did in just under four years in charge was something else. Something that should never be allowed to be repeated. Anywhere. Ever. None were spared, as homes and land were confiscated and people were forcibly removed either to diabolical working camps or hellish prisons.

Pol Pot, the leader of the Khmer Rouge Regime was a seriously evil individual. His extremist utopian vision for the country was that it would return to a pureist agrarian society. Modern machinery was abandoned and citizens were forced to farm rice for upto 19 hours per day. Anyone who disobeyed or threatened his plan were executed. This included teachers, doctors, artists, engineers – all academics. A Brit, a Canadian and a New Zealander were even butchered for straying into Cambodian waters.  The regime was also highly suspicious of anyone who wore glasses or that could read, seeing both things as a symbol of intelligence. They too were tortured and killed.

‘Its better to kill an innocent by mistake, than spare an enemy by mistake’ – Pol Pot 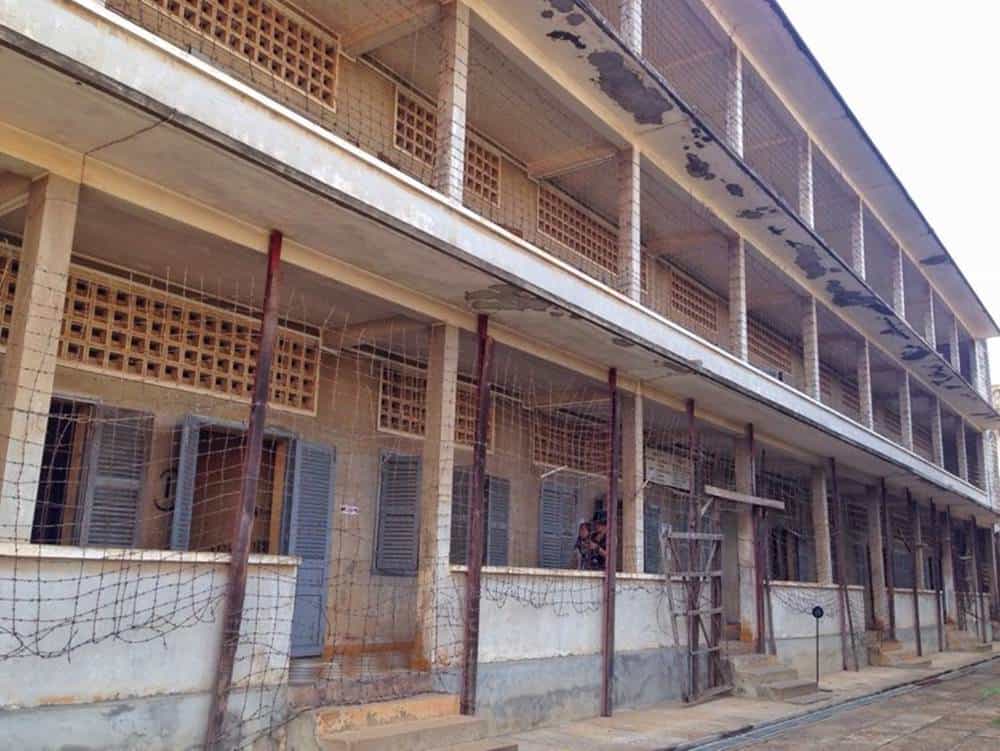 Children were recruited as prison officers and taught the violent torture techniques known internally within the party as ‘smashing’. The purpose of the torture was to elicit fantastical confessions such as being CIA informants, and prisoners were tortured up to three times per day. As well as unspeakable violence, disgusting and barbaric torture methods were employed such as stuffing insects into women’s vaginas and sewing them shut. If prisoners died before their death was ordered or they committed suicide, suspicion of the supervising prison officer being a sympathiser or a CIA informant themselves was aroused and they would be also be ‘smashed’.

‘He who protests is an enemy, he who opposes is a corpse.’ – Pol Pot

Universities, hospitals, banks and schools were all either destroyed or turned into prisons. One former school/prison in Phnom Penh has now been adapted to a museum. The Tuol Sleng Genocide Museum is a place where you can actually feel death shrouding you. As I somberly walked through the old classrooms split into tiny prison cells and the torture rooms where the metal bed frames with chains still stood on floors stained forever with blood, I struggled to breathe. Filled with horror, disgust and distress, the audio guide took me on an incredibly emotive and detailed journey through the museum and Khmer Rouge history. I was so overwhelmed at times that I had to step outside and sit down. 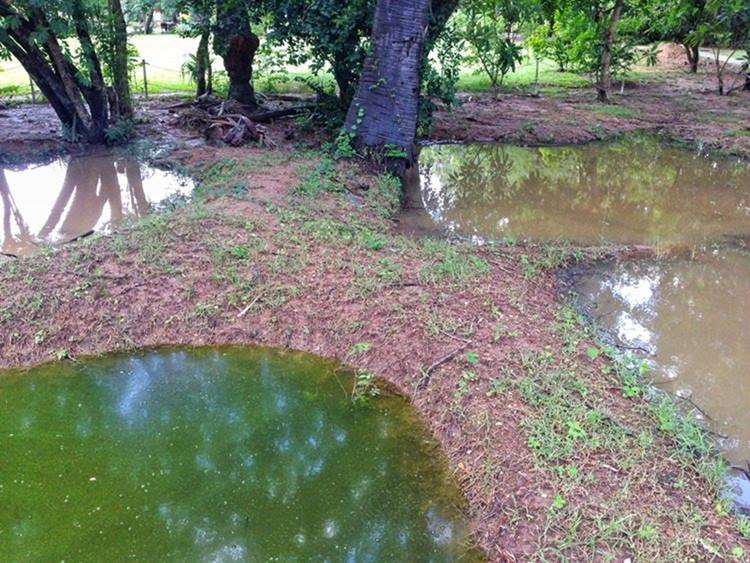 Nine miles from central Phnom Penh are the killing fields of Choeung Ek. The audio guide here is equally as excellent, sensitively delivering a harrowing tale of suffering and brutality. Walking amongst the mass graves of thousands of men, women and children was something that I will remember for the rest of my life. Bullets were precious to the Khmer Rouge and so they weren’t ‘wasted’. Hapless victims were executed by blows from axes or metal rods. Perhaps the most horrific site was a large tree at the side of an excavated mass grave of children. Babies and young toddlers were picked up and swung by their feet, their heads brutally smashed against the tree before being tossed into the pit.

‘No gain in keeping, no loss in weeding out’ – Pol Pot

The impact of visiting these places was such that it was all I could think about for days. I sat in the cafes looking at men and women that were of an age to have lived through it, wondering which side they had fallen on. Had they been someone powerless against the regime, forced to torture their kin with barbaric violence. Or had they been nearly worked to death whilst helplessly watching their loved ones perish around them. I examined their eyes and the lines on their faces as they sat chatting to friends or quietly reading the newspaper, unable to guess, knowing that either way the deep scars their souls bear are beyond my comprehension. 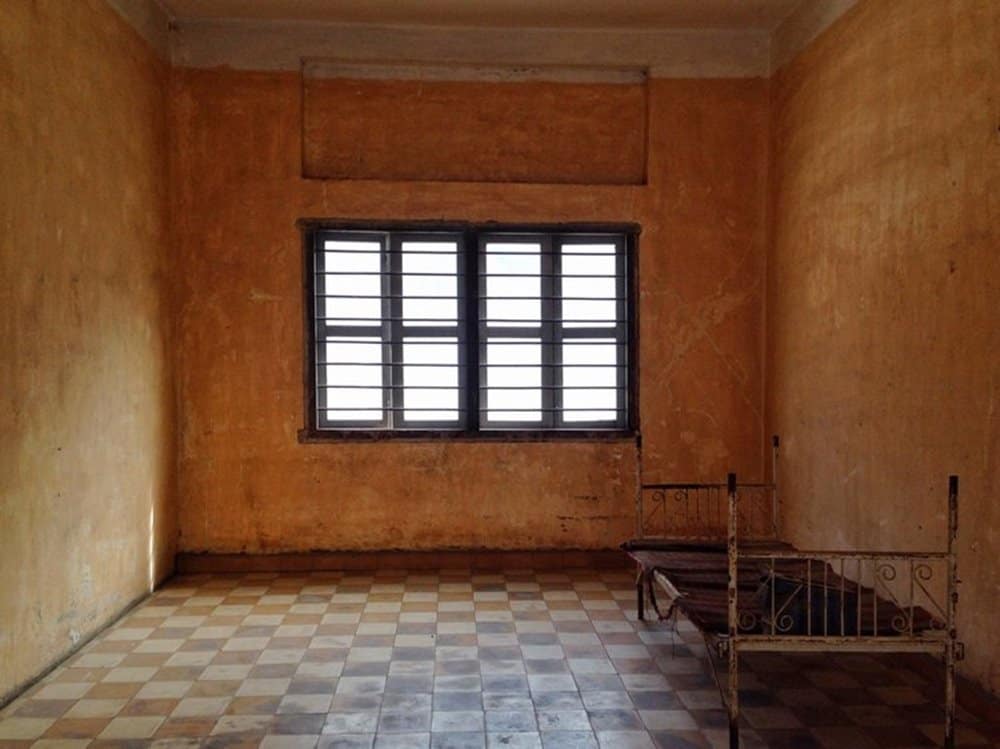 But as unforgiving and uncomfortable as learning about the Cambodian genocide was, I implore you to visit these museums. Go and be silenced by the glass memorial shrine housing thousands of human skulls at the Choeung Ek Killing Fields. Allow the tears to fall as you stand amongst the photographs on display at Tuol Sleng Genocide Museum, showing thousands of emaciated faces, pictured as they were dehumanised. It can be easy at times to want to live life in your comfortable bubble and not look at difficult things. It’s not selfish, as humans we’re just built to self preserve. But this atrocity is something that I strongly believe you should expose yourself to if you have the chance.

Something that I really struggle to get my head around is that the genocide happened so recently and yet the world stood by for years and did nothing. Even when Vietnam intervened in 1979 to help the defectors overthrow Pol Pot, the west clearly demonstrated the overhanging animosity that remained from the Vietnam war, as the UN continued to recognise the Khmer Rouge as the ruling party until 1991. During this time the country received zero international aid, which I find abhorrent and quite frankly beyond belief. 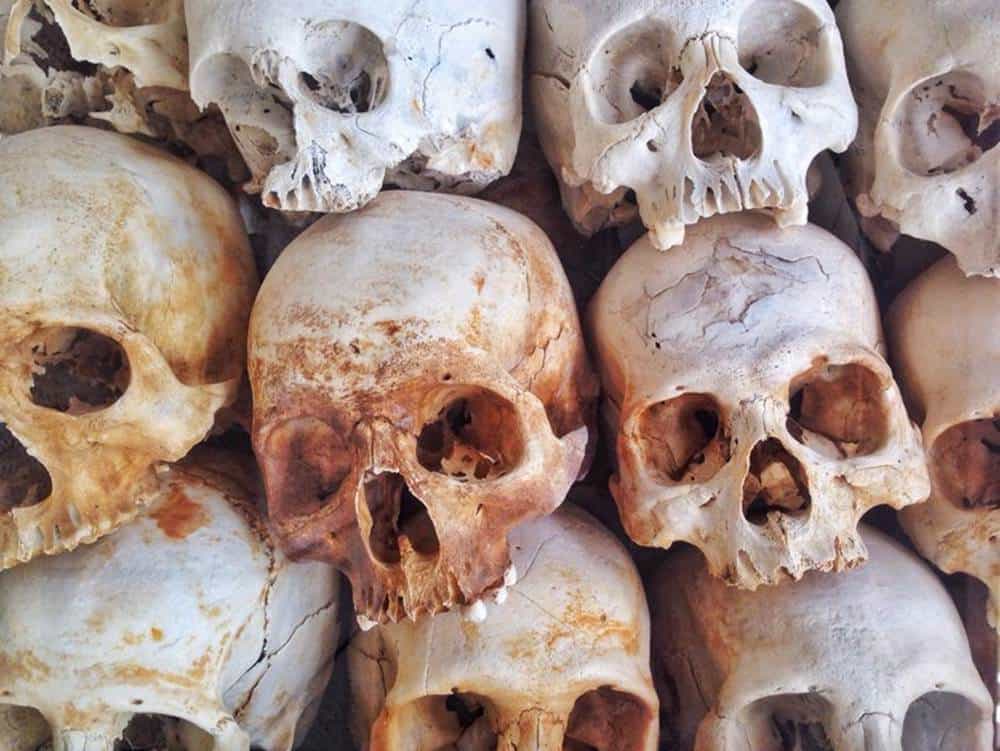 Today, aid is being provided by many countries and international charities are doing their utmost with the resources they have. Specially skilled people are working hard to alleviate the devastating effects of post traumatic stress disorder that ravages the lives of the Khmer people. But poverty in Cambodia is rampant. And children born after the Khmer Rouge reign have not escaped. Being raised by family members with mental scars so deep, for many the cycle of abuse continues. Outside the museums children beg for water and families shelter under tarpaulin sheets on the backstreets of the city. And that’s just the tip of the iceberg.

So go and marvel at the beauty of Angkor Wat, but please take time out of your trip to visit the hard parts of Cambodia. Take time to learn about the harsh realities of what can happen when bad people are in charge of a country and powers that can, don’t step in to stop it. In today’s political climate it’s probably more important than ever.

A travel guide to Kampot and Kep in the gorgeous region of Southern Cambodia. Here’s our ultimate list of the best things to do in Kampot & Kep. 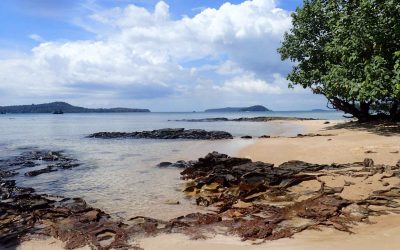 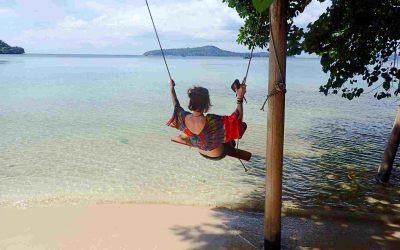 We absolutely loved our time on Cambodia’s coastline. Its breathtaking beauty and unspoilt islands were a true highlight. But is it ethical to visit a place that you believe is being developed unsustainably?