If you are staying in Barcelona for more than a weekend and fancy exploring a different area of Catalonia, a Tarragona day trip from Barcelona is a really good shout. It has a completely different feel and dare we say, has the romantic edge over Barcelona. Ancient city walls circle the old town with lots of intriguing narrow streets to explore and picturesque squares dotted with cozy bars to just sit and chill in. Not to mention a stunning beach and some seriously impressive Roman architecture.

Getting To Tarragona from Barcelona

From Tarragona train station it’s then just a 5 minute walk into the centre of Tarragona old town. We recommend using the Maps Me app and downloading the offline map of Tarragona to easily find your way around. Next up in our Tarragona guide is a list of all the best things to do in Tarragona which you may want to pin on your map for your Tarragona day trip itinerary.

What To Do in Tarragona Spain

Perhaps the best view in Tarragona, the Mediterranean Balcony, is an absolute must see on your Tarragona day trip from Barcelona. Having said that, you can hardly miss it because it’s huge. It’s located in the heart of Tarragona and at 40 metres high offers an extensive viewpoint of the gorgeous Tarragona coastline.

The railings, designed by Ramon Salas i Ricomà in 1889, are supposed to bring good luck to anyone who touches them. So you may as well make a wish whilst you are stood admiring the panoramic views out into the beautifully blue mediterranean sea, because you never know! If you turn right out of the station you’ll come to some steps that will take you up to the balcony.

The main street in Tarragona, La Rambla Nova, is lined with shops and restaurants with a pedestrianised runway down the centre that regularly hosts local markets and festivals. Head here for your retail therapy and if you fancy a coffee or ice cream at one of the many cafes.

The best area in Tarragona, Part Alta is the old part of town and it is so pretty. It’s like a maze. Narrow streets wind their way through the shadows of tall beautiful buildings and remains of the city’s Roman walls before spitting you out into to the open air of picturesque squares.

We loved exploring and getting lost here, the architecture is stunning. And when you get too hot or tired simply chill for a while in one the squares with a nice glass of cold sangria or whatever takes your fancy. There are also plenty of cute boutiques to tempt you here too.

Speaking of picturesque squares, Placa del Rei, is one of the best for getting up close with the old Roman walls of the city. The Roman Praetorium with it’s underground chambers and passageways is the huge building at the corner of the square and is just a tad ancient, dating back to the first century BC.

If you’re a museum fan, Tarragona Archaeological Museum is here too, joined on to the Roman Praetorium. We didn’t go in but reviews says it has one of the finest collections of ancient Roman art in the whole of Spain if that’s your bag.

With nearly a hundred stalls, you’re sure to find something irresistible to buy at Tarragona’s central market. But even if you’re not not in a shopping mood, stop by to see the beautiful building, opened in 1915. It’s open Monday – Saturday between 7.30am – 2.00pm and 5.30pm – 8.30pm, traditionally keeping in line with siesta time. Of course.

The sand in Tarragona is golden and there’s 15km of it, hence the nickname ‘Costa Durado’ or golden coast in English. But the closest one for you to visit on a Tarragona day trip from Barcelona is Playa del Milagro. The water is mild, safe to swim in, and there are showers and toilet facilities on the beach. Thankfully there was a bridge being built from the town to beach when we were there so hopefully that’s open now because it’s a bit of walk down otherwise.

This is an absolute must see on your Tarragona day trip from Barcelona. Another part of the city that dates back the the first century BC. Tarragona amphitheatre has had numerous uses other than staging gladiatorial games over the years, including a prison. It is one of the most important historical sites in Spain and is seriously impressive.

Beginning at Via del Imperio and running to Puerta del Rosario, the Paseo Arqueológico makes for a really pleasant stroll as garden paths wind through trees and Roman walls. Once upon a time the ancient defence system enclosed the whole of the old town and in some places still extends up to 10 metres tall.

If you have time during your Tarragona day trip from Barcelona, it’s worth nipping down to the start of La Rambla Nova to see this striking monument. It depicts the unusual and local tradition of castells, which involves people standing on each others shoulders to create a human tower.

The almost life size, 219 person bronze statue celebrates the strength and trust within the Catalan community. Dating back at least 200 years, it has been designated as an Intangible Cultural Heritage Tradition by UNESCO. See if you can pick out the faces of Pablo Picasso, Antoni Gaudí or Joan Miró, amongst the figures.

Tucked away, close to the cathedral is this colorful and charming mural. A great little photo opp on your Tarragona day trip from Barcelona. Painted by, Carles Arola, he uses nineteenth century characters with the oversized heads popular in the Catalan festivals to depict a vibrant facade. See if you can spot the man on the balcony with the horse – that’s a self portrait by the artist.

The Cathedral of Tarragona is a stunner and a must see on a visit to Tarragona. A transitioning style of Romanesque and Gothic, a church has existed on this site for centuries in various forms. If you want to explore inside you can check the opening times and buy tickets (€5 per adult) on the website here, prior to your Tarragona day trip from Barcelona.

Also known as Pont del Diable, Devil’s Bridge, if you have time you won’t regret a trip out to Les Ferreres Aqueduct. The dramatic bridge was once part of the Roman aqueduct built to supply ancient Tarragona, or Tarraco as it was once known. The seriously impressive structure is 2000 years old and was built to deliver water into the city from the Francolí River 15km away.

It always blows my mind a little to see such massive feats of engineering at work in ancient architecture like this. It’s 4km north of the city and has been listed as a World Heritage site since 2000. We visited here in a car, but you can get there by public transport from Tarragona, although it’s probably not possible timewise on just a Barcelona one day trip.

Where To Eat When You Visit Tarragona

Situated in the prime location of Plaça del Rei, the outside seating area of this Tarragona restaurant is a great spot for grabbing some Paella and a jug of Sangria. Although it doesn’t include a drink, they also do a reasonable menu del dia at €12.50 on weekday lunch times.

Tucked in the corner of pretty Plaça del Forúm, this was our favourite place that we ate at in Tarragona. Not only because the food was super tasty and a seriously good price, but also because we got half a bottle of wine each included in the €11 menu del dia.

Where To Stay In Tarragona

Although it is possible to experience the best of Tarragona on a day trip from Barcelona, there’s so many things to do in Tarragona that it would be easy to turn your visit into a one or two night stay. You can search for Tarragona accomodation options for all budgets below. 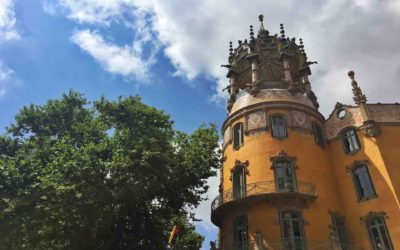 What To Do In Barcelona For 3 Days

Planning a trip to beautiful Barça? Experience the best of the city with this comprehensive travel itinerary of what to do in Barcelona for 3 days.

An Unforgettable 4 Days in Barcelona Itinerary

A nice amount of time to see the main sights and relax a little, here’s lots of useful information for planning your 4 days in Barcelona itinerary. 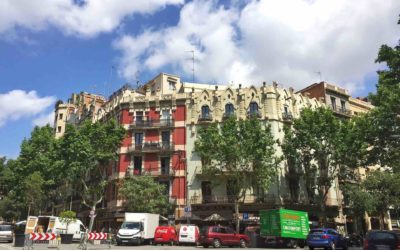 How Many Days In Barcelona?

Wondering how many days in Barcelona is right for you? Allow us to help you decide with these awesome 3, 4 and 5 day Barcelona itineraries.