The 5 Best Travel Documentaries and Series on TV

If like us you’re always on the lookout for inspiration for your next adventure, then travel documentaries can be a great source. As we’re totally obsessed with travel and adventure, we like to watch programmes that fill us with wanderlust and make us excited about taking on a new challenge.

Some of the programmes we’ve watched cover epic journeys through exciting uncharted territory, some are about heroic feats of human endurance, while others are just plain bonkers. We’ve picked out the 5 best travel documentaries and series that we’ve seen recently.

Pin me for Later… 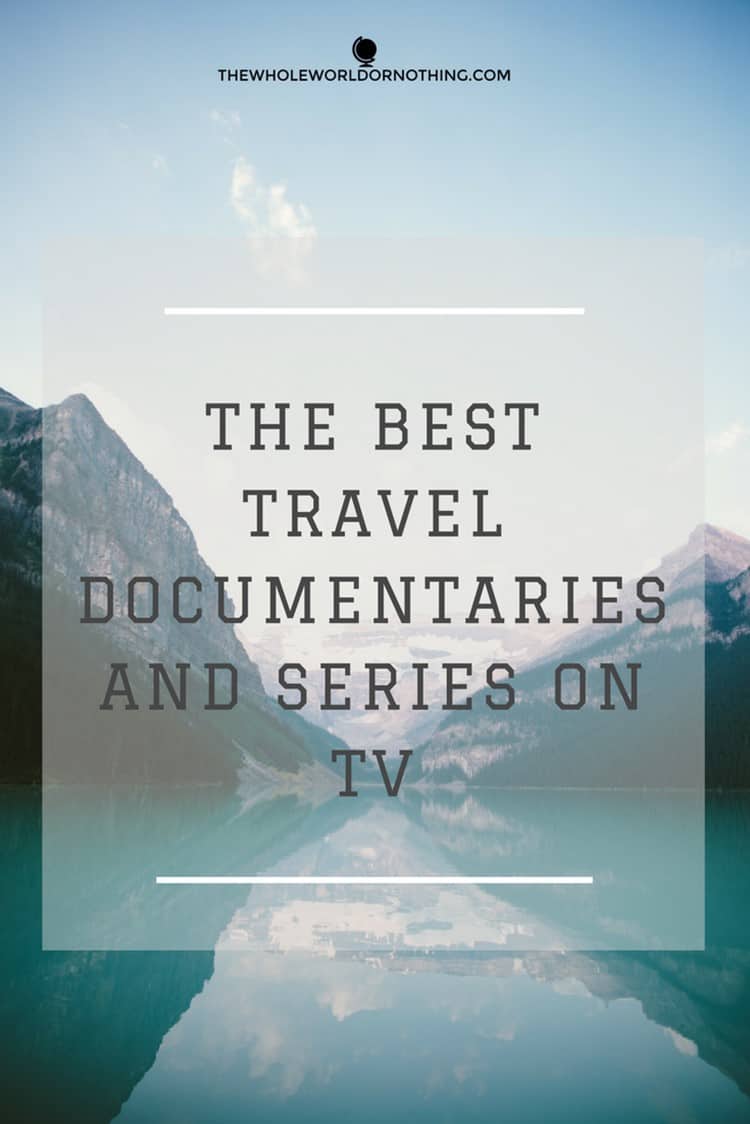 Variously described as an extreme endurance explorer, Britain’s wildest adventurer, and a bit of a lunatic, Sean Conway’s Running Britain show is compelling viewing. Filmed entirely by Sean over 44 days, it follows his attempt to complete the running leg of a length of Britain triathlon. He’d already swum down the UK coastline and cycled from John O’Groats to Land’s End before deciding he would top it off by running the same journey.

Now I don’t know about you, but if I was planning on undertaking a feat as big as this I’d probably try to organise it as well as possible. Over the first episode you begin to get the impression that he’s just woken up one morning and decided to give it a go.

You watch him drinking from a puddle on the road, struggling to erect a tent that he’s never used before and even wandering around Tesco trying to figure out what snacks will provide him with the highest protein.

He’s an endearing character with an interesting back story, and like many endurance athletes, more than a little bit nuts. Though it’s not the type of thing we’d ever undertake, his journey is both entertaining and inspiring.

We were lucky enough to see Simon Reeve being interviewed live at a travel show recently and he is as engaging and excitable off screen as he is on. His cheeky chappy persona and sense of adventure means that we love pretty much everything he does and Indian Ocean is one of his best travel documentaries so far. Simon Reeve likes to undertake trips that have a uniting central theme, but take him into diverse landscapes and unique situations.

Starting at Cape Agulhas, the southernmost tip of Africa, he ends up in Australia via countries as diverse as Oman, Madagascar and Sri Lanka. Along the way you watch him overcoming various dangerous obstacles from pirates to sharks and enduring challenging conditions. The TV programme documents the difficulties facing the everyday people that Simon Reeve meets and the many environmental issues that are at play in this area.

This guy is a real adventurer and proved his credentials when he walked the entire length of the Amazon from source to mouth, completely unaided. It was a journey that took him over two years and set him well on the way to adventurer superstardom.

Nowadays he undertakes expeditions to far flung and remote destinations for his TV programme Marooned with Ed Stafford. The basic premise is that he’s dropped into an inhospitable environment with virtually no equipment and a mission to not just survive, but thrive in whatever conditions he finds himself.

It’s never plain sailing and he doesn’t always manage to entirely succeed, often going for days without food. This is definitely far more extreme adventure than we’d ever seek out but it gives you an education in outdoor survival techniques just in case…

Rob Greenfield is an eco-warrior type from California who doesn’t wear shoes, raids bins to forage for food and composts his own shit. James Levelle is an extreme filmmaker from England who signs up to produce a documentary on Rob’s attempt to travel from Argentina to Panama with absolutely no money. So far so simple.

In truth, Rob is every bit annoying as he sounds and James’ focussed approach to the journey starts to rub him up the wrong way pretty quickly. The unlikely pair’s relationship soon hits the skids which makes for uncomfortably addictive viewing, to the point that you’re almost wincing at times.

Although Rob clearly cares deeply about the environment and has good intentions in making the trip, it’s a bit difficult to get on board with his philosophy when he seeks out the kindness of strangers who are far worse off than him.

Escape to the Wild

This show is all about couples and families, who have decided to jack in their previously conventional lives, escape the rat race and head off to remote destinations in search of their dream. Jamie Oliver’s best mate Jimmy Doherty presents the latest series and provides an interesting foil, as he struggles to get his head around the decisions that the people he meets have made.

A lot of the issues raised in the programmes are ones that we’ve faced ourselves as travellers and it’s interesting to see different people’s opinions on them. Jimmy isn’t shy in coming forward and at times upsets the people he’s interviewing with his line of questioning.

It’s also fascinating that Jimmy doesn’t appear to see himself as similar to his subjects, even though in many ways he’s done the same thing – he left a high salaried job in the city to move to the countryside and start a pig farm. It’s a great watch and provides loads of inspiration by showcasing the many different ways that people can live their lives.

We don’t tend to watch a lot of television these days, but when we do it’s usually got a travel and adventure theme to it. If you’re in need of a bit of inspiration or just want to experience the world through someone else’s eyes, then you’ll love what we think are the 5 best travel documentaries and series on TV right now.

What’s your favourite travel documentary or TV show? Let us know in the comments below, and also if you’ve seen any of the ones we’ve mentioned and what your thoughts were.