In the 10 plus years that we lived in Nottingham it’s face changed quite a lot. While the Hockley area of the city has always had a night scene, it’s now home to the best bars and restaurants in Nottingham city centre. And is the place to be on a Nottingham night out.

A recent transformation has seen many of the old but rather tired favourites in the area undergo swanky new refurbishments. And many new funky little places have popped up where old businesses have fallen by the wayside.

Owing to a large student population, Nottingham nightlife previously centred around a club culture with drinks offers and a dance floor being the aim of your evening. But thanks to the rise of the independent bar and surge of craft beer popularity, you’ll now see a different vibe.

Many people on a Nottingham night out are gravitating towards the trendy restaurant and late night bar scene. Here’s our list of best bars and restaurants in Nottingham city centre that you won’t want to miss.

At only a few weeks old when we visited, this popular little spot easily earns itself a top pick on our list of the best bars and restaurants in Nottingham city centre. Set over two floors and serving some seriously tasty Indian street food with perfectly balanced cocktails, Mowgli is a great start to any Nottingham night out. 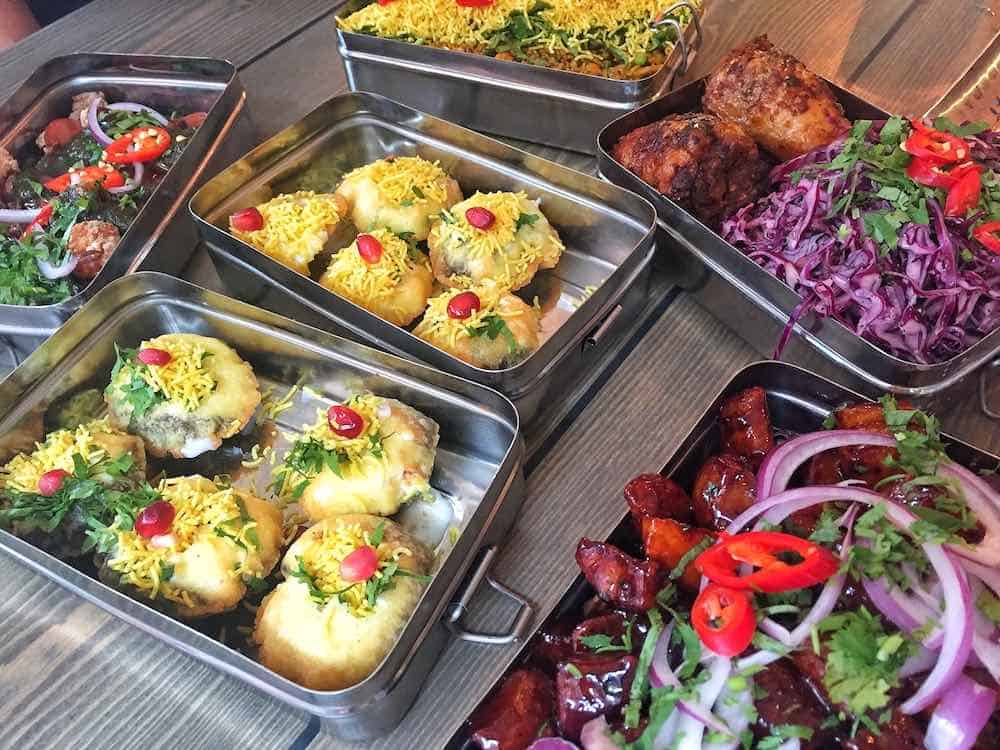 Trust us, once you pop one of their chat bombs into your mouth, you won’t want to leave. Other big hitters on the food menu are the gunpowder chicken and Bhel Puri. They also have more standard curries with lots of vegetarian options. But the word on the street for eating out at Mowgli in Nottingham is just to order your table a selection of starters to share. 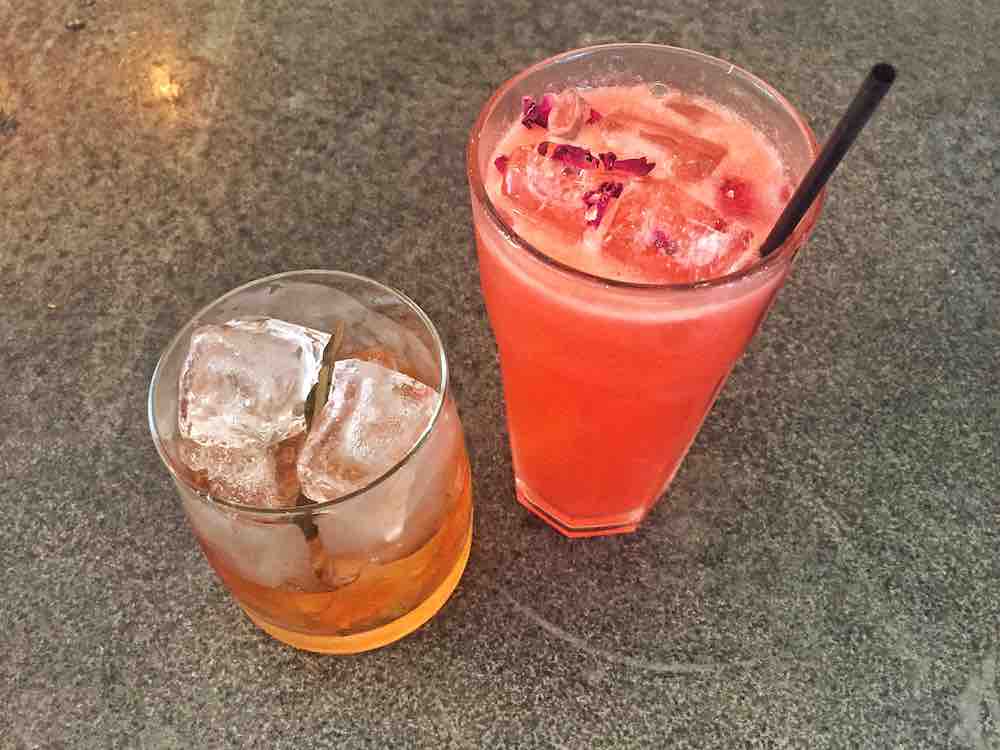 This new favourite of Nottingham city restaurants also has some great cocktails. The rose and raspberry gin and tonic is a cracker, as is their smoked cardamom old fashioned. You can’t make reservations so if you want to be seated downstairs by the window in one of the swing seats, you many have to wait a little while for the table. 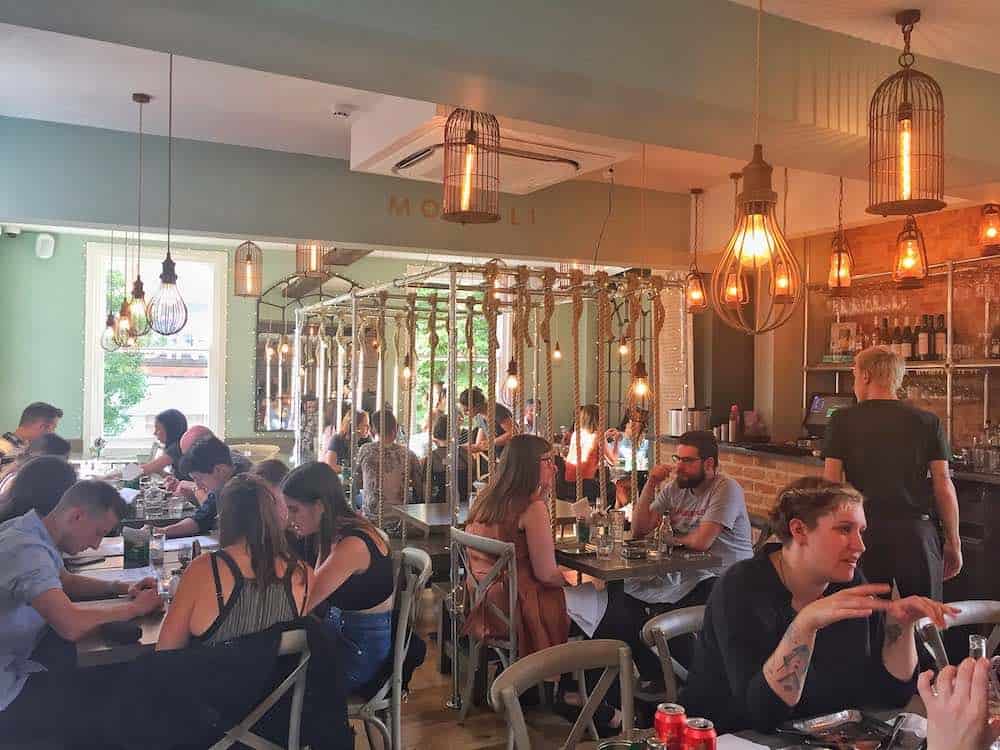 Previously part of Nottingham’s rock scene, this used to be one of the grungier pubs in Nottingham. But after closing in 2016, it was refurbished under new management. A microbrewery and organic kitchen were added, widening the appeal and tastefully brightening the place up. 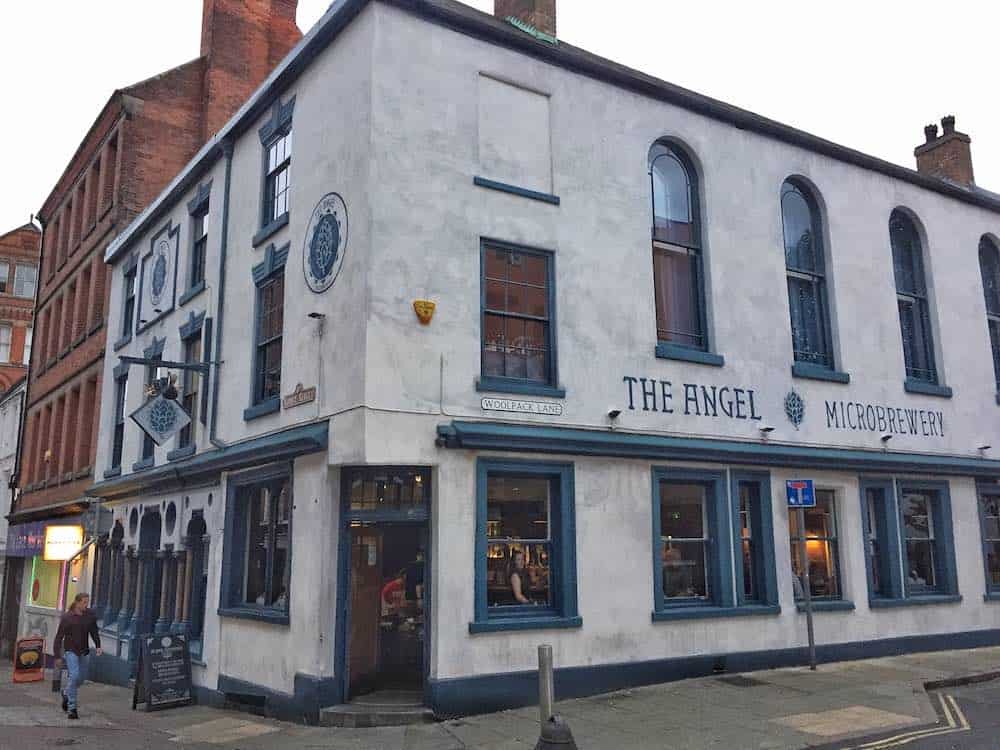 In most respects it feels like a completely different pub, yet it has retained all the best bits of the good English city pub feel. Their claim on their website is to offer a ‘creative and tasty plant based alternatives to the traditional pub fare’. But they do cater for both herbivores and carnivores, creating a type of mix and match menu affair, making it one of the best places to eat in Nottingham for a mixed group.

We ordered a selection of craft beers, of which there are quite a few on both keg and cask depending on your preference. This is what lands The Angel Microbrewery on our list of the best bars and restaurants in Nottingham City Centre. 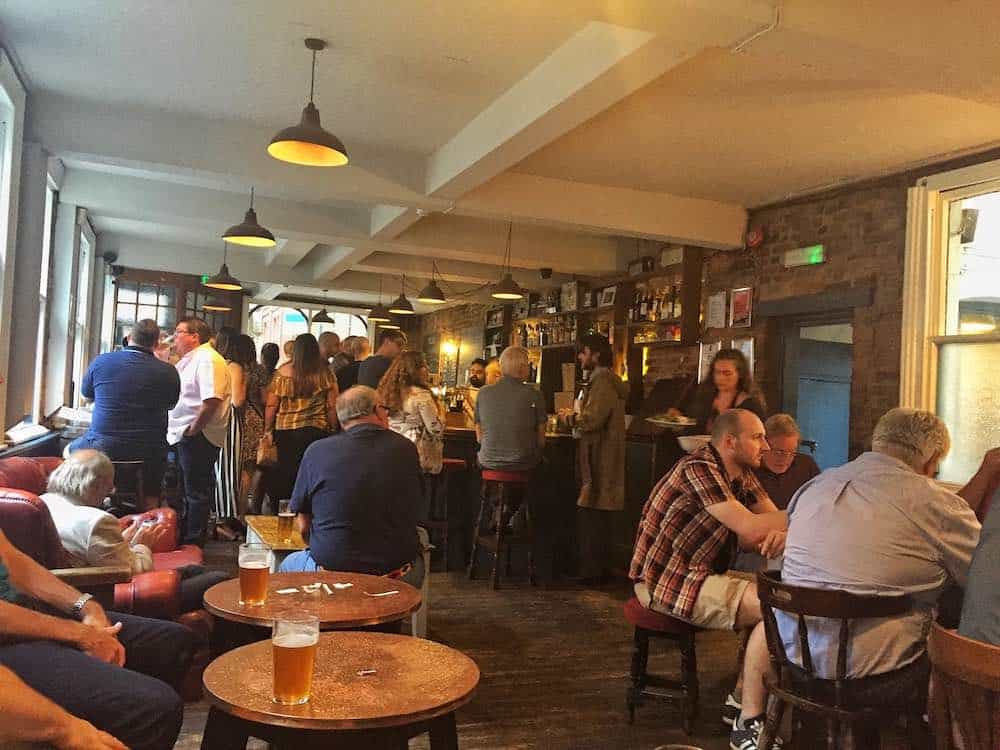 It’s also the place to head if you looking for some entertainment to go with your craft beer on a Nottingham night out, with the upstairs of the pub hosting a variety of comedy, poetry and live music gigs. You don’t need to be dressed up the nines to fit in here either. It’s gets louder later, but early on it’s a more relaxed affair welcoming a healthy after work kind of crowd. It is mostly a walk in venue but you can reserve tables.

An eco-friendly brewery from Scotland, Brewdog in Nottingham opened it’s establishment in the shell of an old factory in 2012. And while during that time, many of the best bars in Nottingham have risen and fallen, it remains a firm favourite for a Nottingham night out. 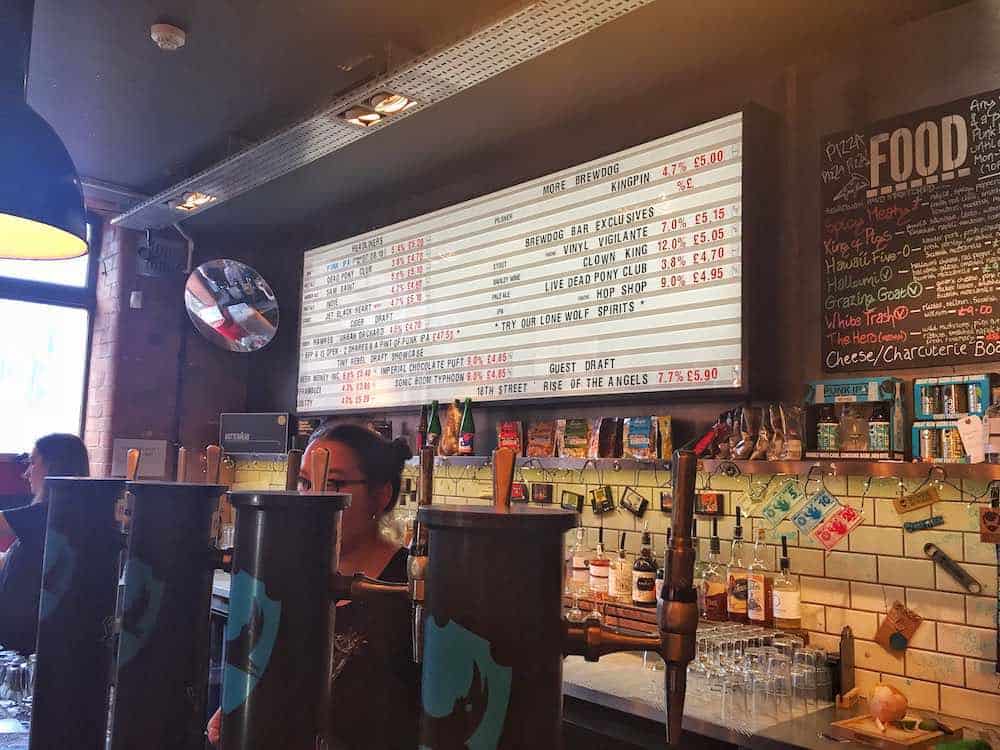 It’s been popular ever since it opened, but in some respects seemed a little ahead of its time for Nottingham nightlife when it was in its infancy. Meaning its reputation as one of the best bars and restaurants in Nottingham city centre has only grown over time and continues to do so.

Filled with rock beats and lively chatter on weekend evenings, you can also enjoy a quieter chill out space with mates at other times. Playing board or video games and sharing a pizza while enjoy some serious craft beer is the order of the day. You can even take some beer home with you if you so fancy. 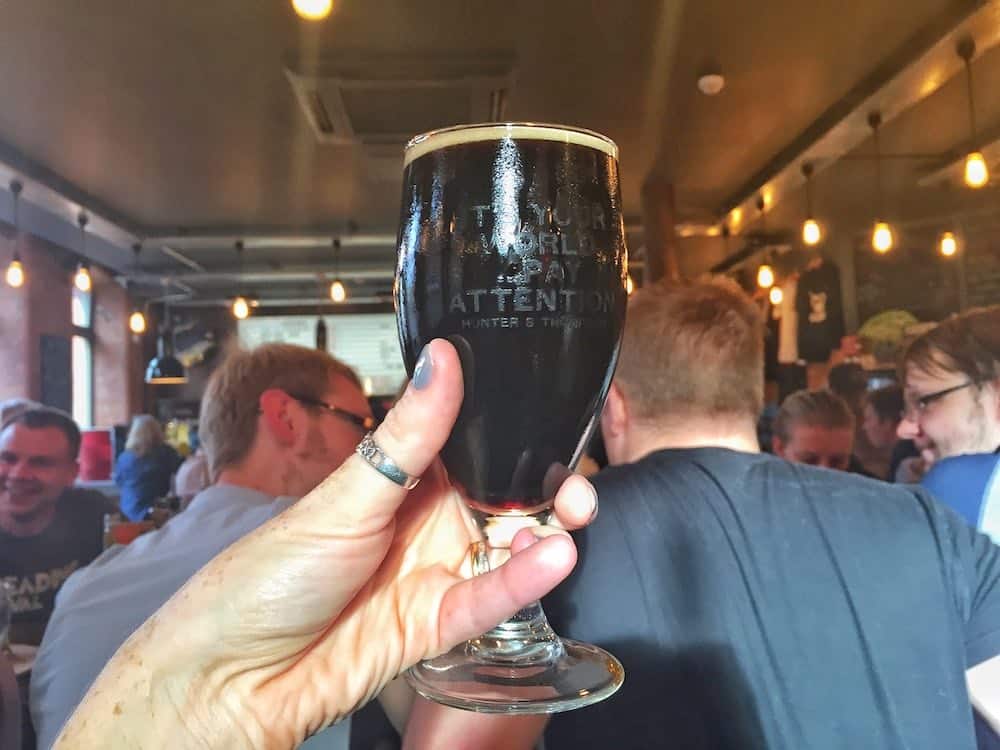 They do beer sessions where their experts will talk you through the brewing process and provide beer sheets so you can even have a crack at recreating your favourites at home. Heavy on their employer responsibilities, social conscious and community giving, this is one of the pubs in Nottingham you can feel really good about spending your money in. 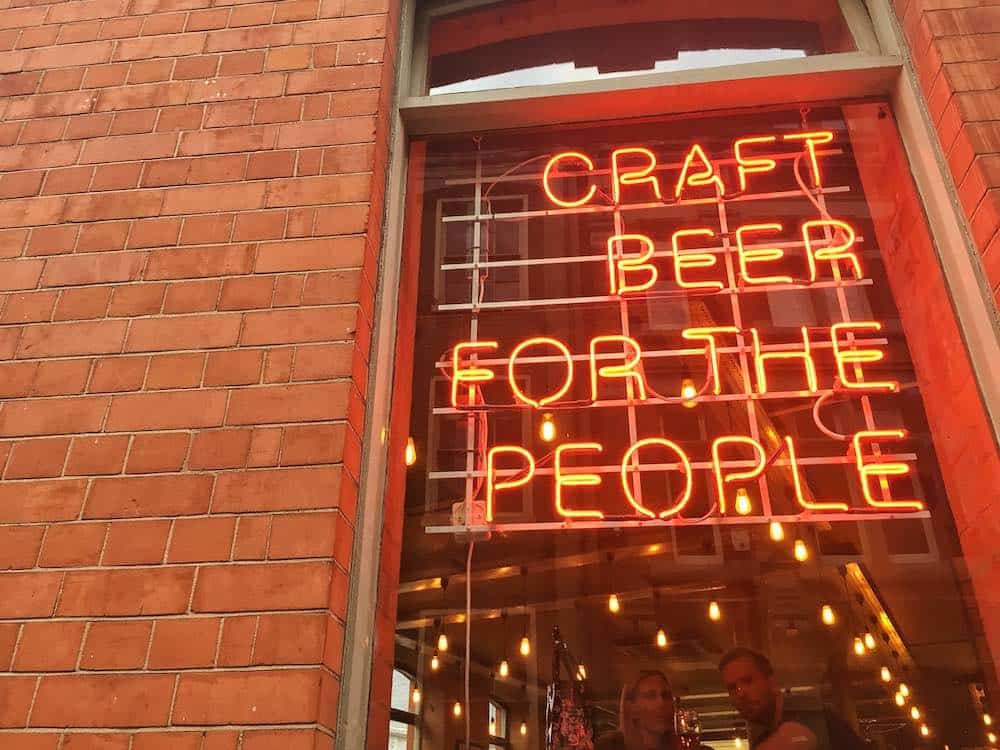 Sister to Ibericio World Tapas, one of the most exclusive places to eat in Nottingham, Bar Ibercio is found just around the corner. It enjoys all the fanfare of the exquisite tapas food without needing to reserve weeks in advance to get a table. 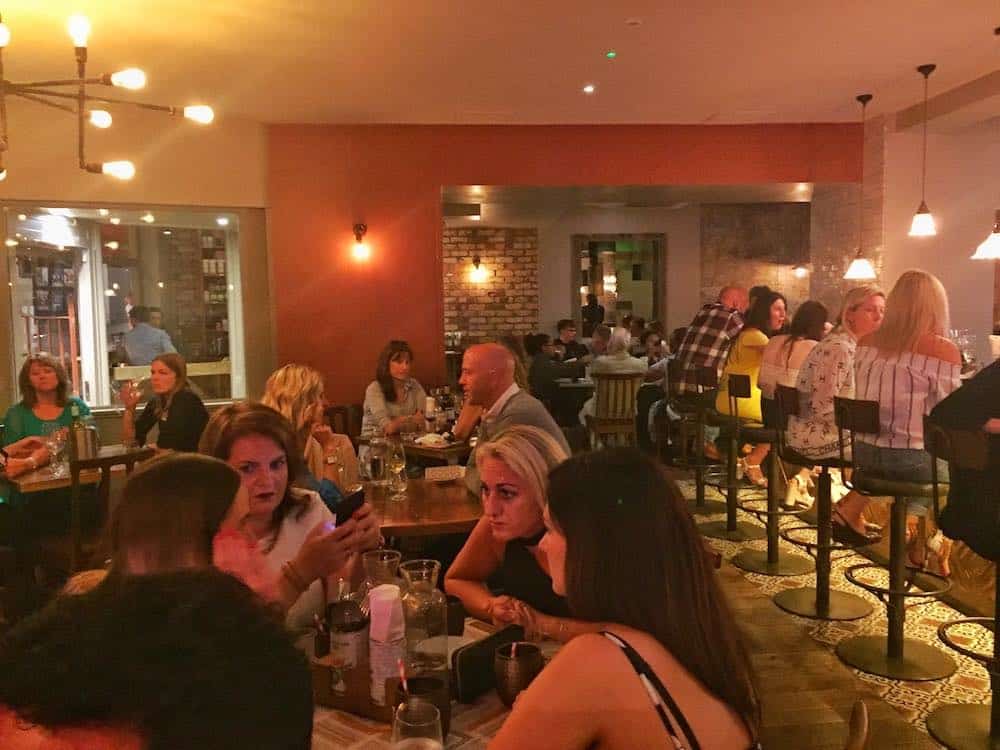 In fact, they don’t take bookings at all, you simply turn up on the night & enjoy a beer or cocktail at the bar while waiting to be allocated a table. Having spent 3 months exploring Barcelona we are confident in telling you, this is some of the best tapas food that you will find outside of Spain. 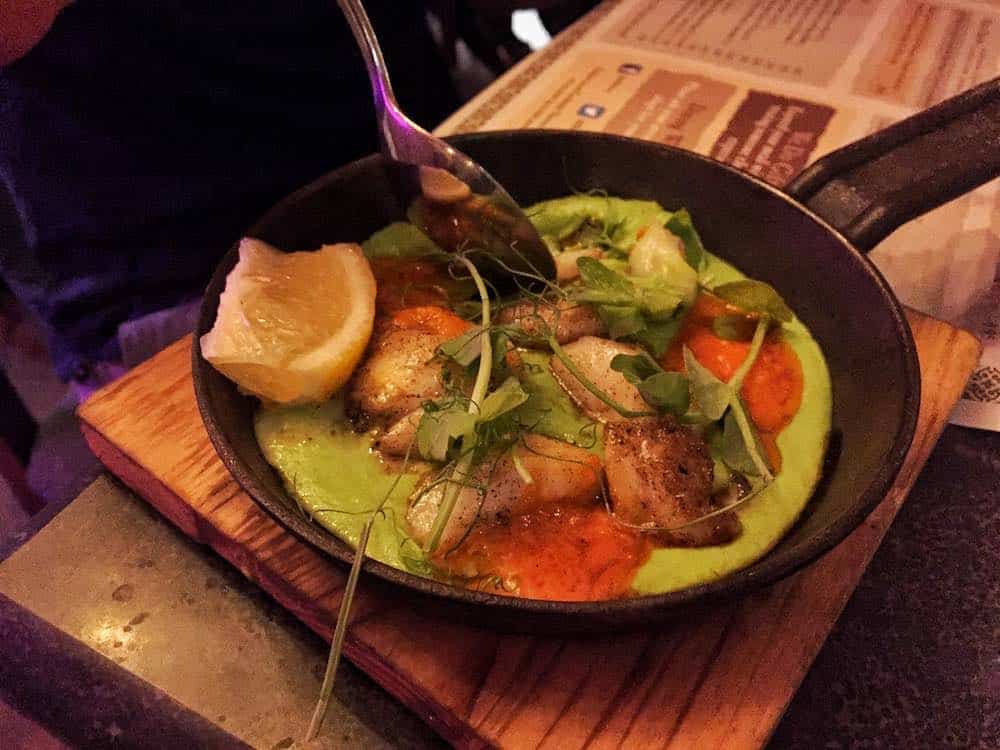 A laid back all day tapas bar, Bar Iberico in Hockley, should be definitely be on your list of the best bars and restaurants in Nottingham city centre to enjoy. Get the crispy cauliflower and the beef flat iron steak, it will be some of the best food to pass your lips. 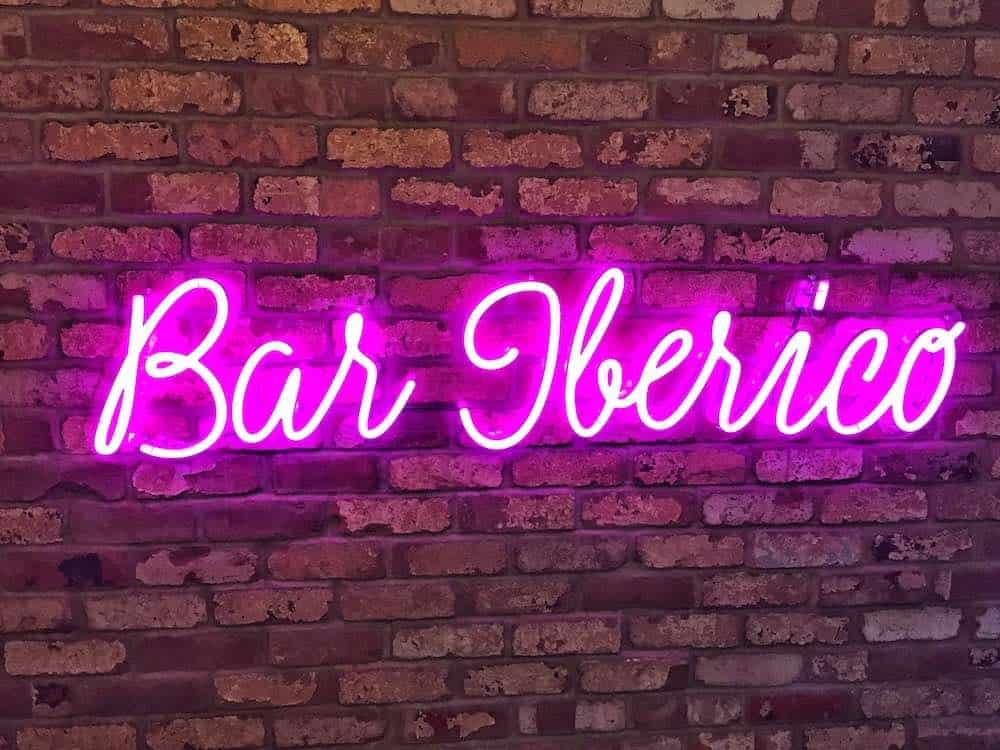 A hidden entrance between Fletcher Gate and Bridlesmith Gate means that unless you have been recommended it, or researched the best bars and restaurants in Nottingham city centre, you are unlikely to just stumble across Junkyard on a Nottingham night out. 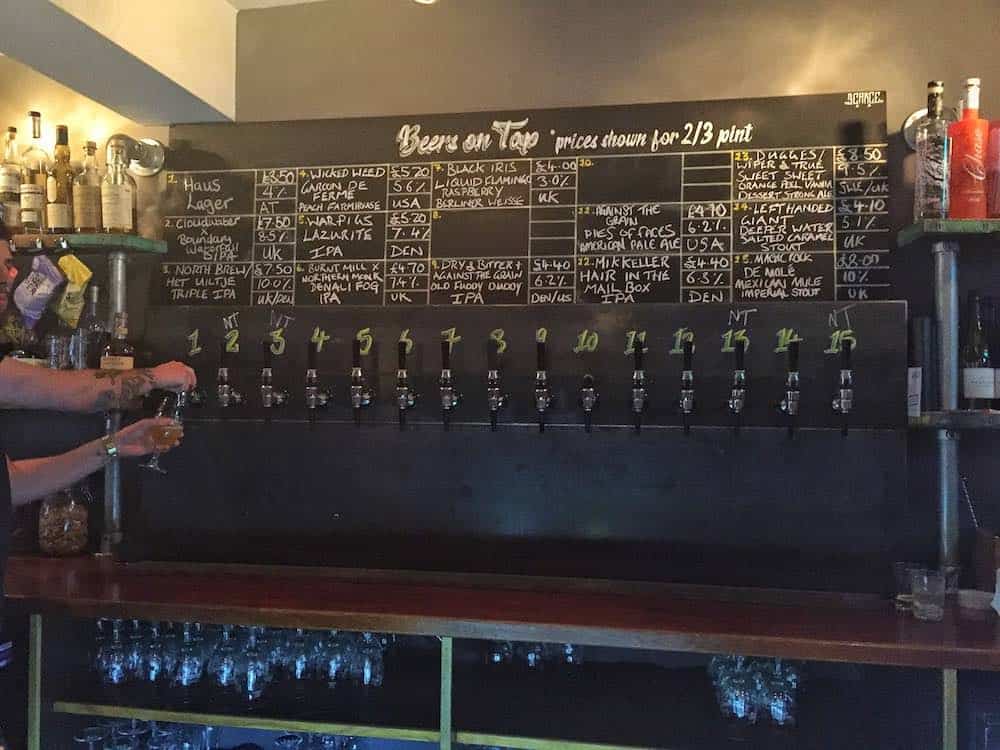 They serve an incredible selection of specialist craft beer by the keg as well as wine and cocktails. The vibe is laid back and the service excellent. Taste any of the beers before you make your choice. And you can also take beer home with you either from their bottled or canned shop selection, or straight from the keg in a growler. 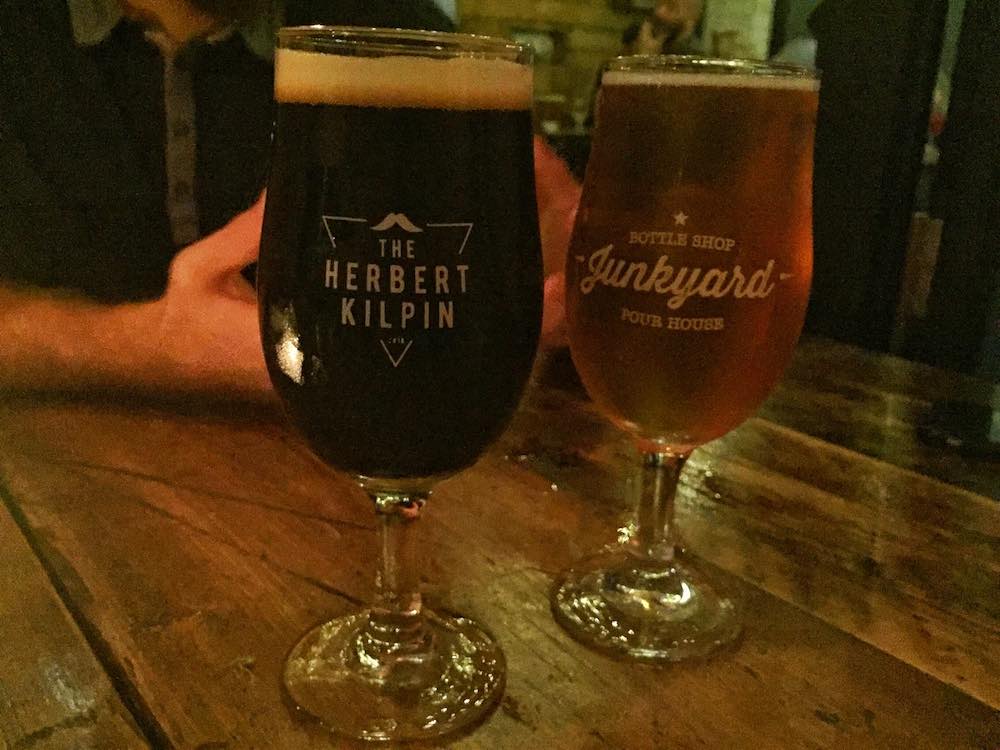 The food menu is based on California favourites with authentic burgers, pizzas and tacos. But in our opinion it’s the bites and sides that run the show. Once you have tasted the mac and cheese balls here there’s simply no going back. This is definitely one of the best places to eat in Nottingham. 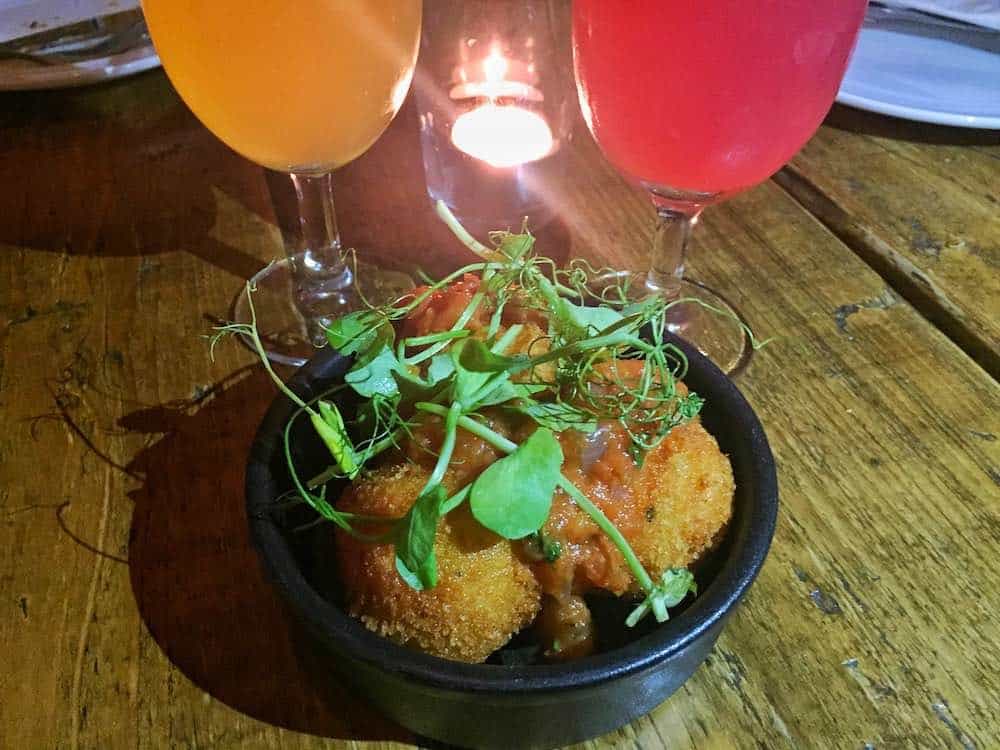 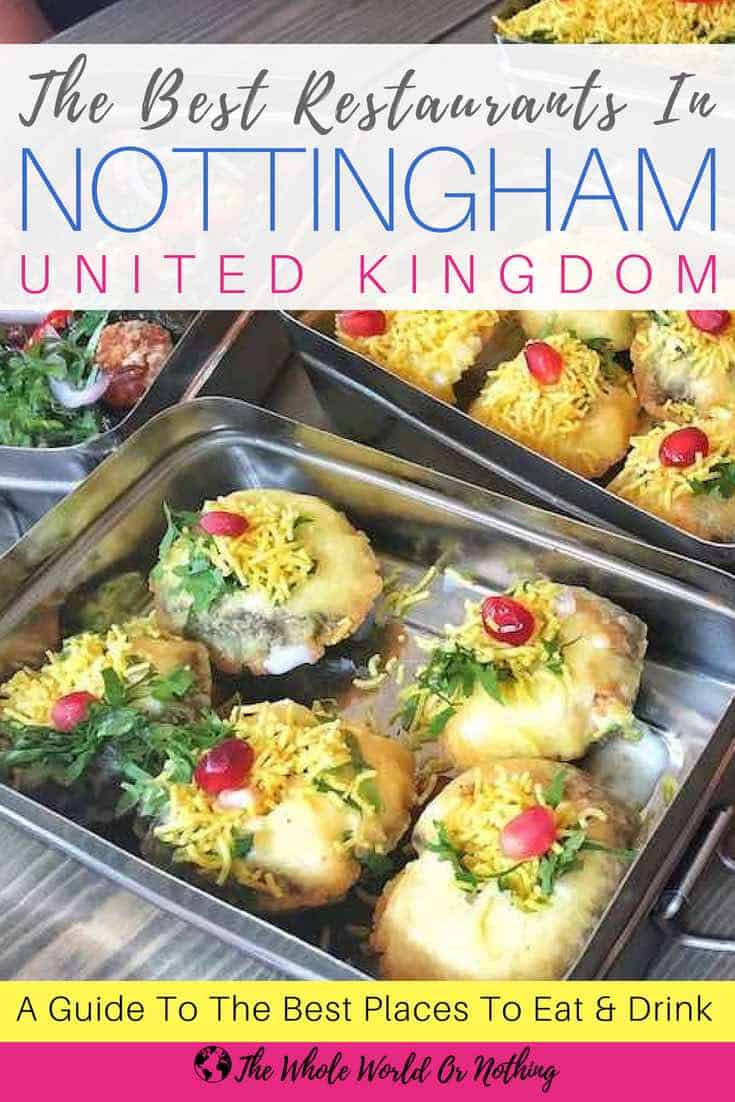 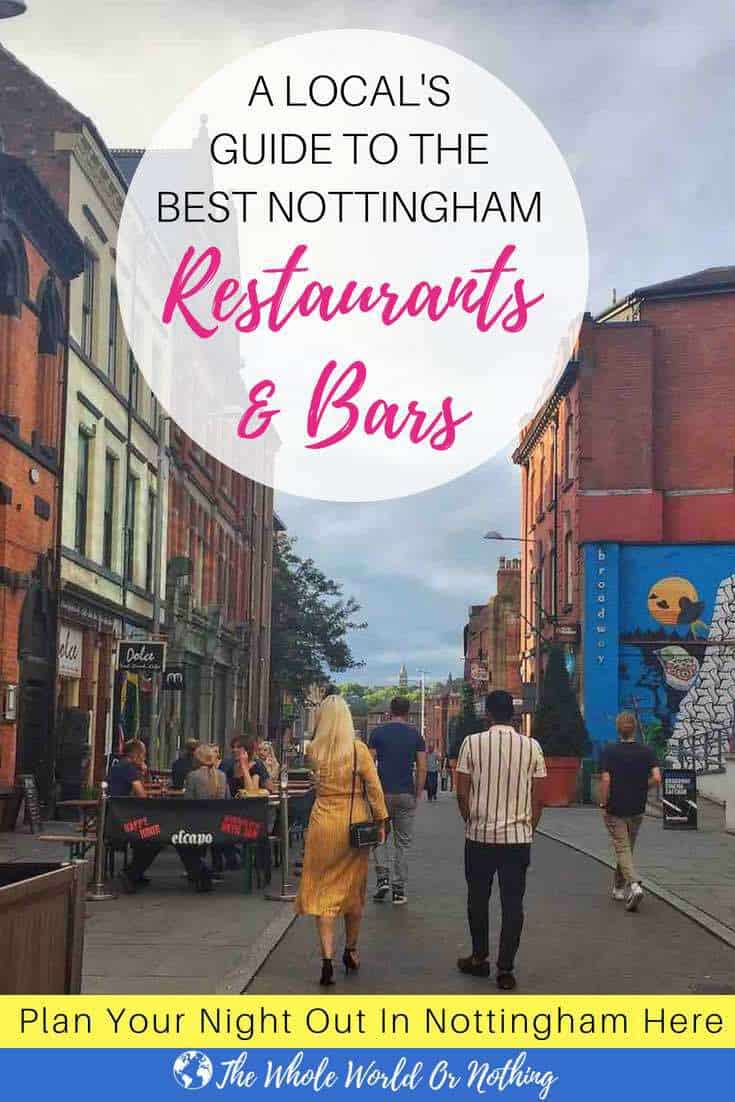 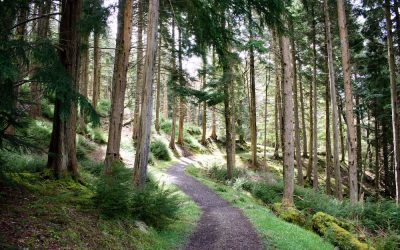 13 Things To Do in Kielder Forest Northumberland

From water to land based activities and day time to night time exploits, here’s lots of fun things to do in Kielder Forest, Northumberland. 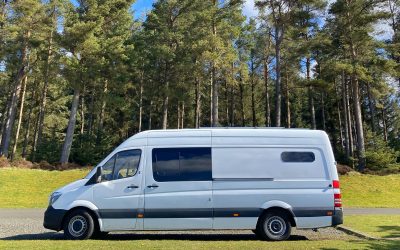 It’s not free, but it’s worth the cost. Essential information about Kielder Forest wild camping in campervan, including the best park ups. 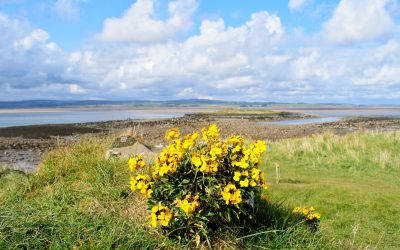 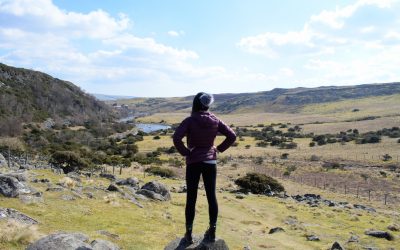 Discover the best walks, attractions you can’t miss & the best pubs to stop by in this outdoor lovers guide to Upper Teesdale and around.